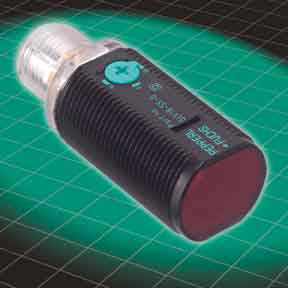 “The primary benefit of clear object detection is the ability to consistently detect transparent materials such as a glass bottle, PET plastic, a web of shrink-wrap, or protective bubble wrap,” says Jeff Allison, Product Manager. “Other types of photoelectric sensors would not consistently detect clear objects because the transmitted light would optically burn through the material, but GLV18 series clear object detection sensors are designed to detect such materials.”

These sensors come in an industry-standard M18 threaded cylindrical housing that is up to 50% shorter and with up to 50% lower power consumption than many competitive models. As a result, they are more likely to fit into space-critical equipment or installations and are less costly to operate – and as lower power consumption enables each power supply to power more sensors, fewer power supplies may be needed in a given application.

GLV18 series sensors also include a unique flush-mount bracket that allows for a simple, tool-less, unobtrusive means of mounting the sensor on a conveyor. Ball-and-swivel and half-clamp mounting brackets are also available to facilitate precise positioning of GLV18 series sensors.

Status LEDs are highly visible and placed in dual positions, 180 degrees apart on the housing, for increased visibility. Additionally, status LED functionality is standardized, meaning that GLV18 sensors don’t just indicate they are powered and see a target, but also indicate if the sensor’s signal strength is lower than it should be so that corrective action can be taken.

GLVL18 series sensors are ideally suited for use in material handling applications, primarily for detecting clear shrink-wrap webs or semi-transparent trays or cartons. They are also well suited for use in packaging applications including, among others, presence detection of clear clamshells, bottles, or pouch webstock. Additionally, the GLV18 series is a very reliable general purpose sensor family that can be used in a number of other markets, including mylar detection in printing/paper applications, and glass detection in automotive applications.