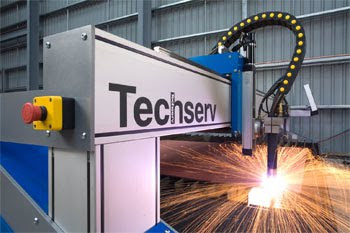 Baldor high performance digital servomotors and drives used on all four axes
Fort Smith, AR, January 11, 2010 – Techserv Cutting Systems Ltd, the specialist manufacturer of CNC profile cutting systems, has delivered four HS 4000 hi-definition precision plasma cutters to the UK’s Aircraft Carrier Alliance (ACA). Each cutter employs an advanced fully-synchronized four axis motion control system – based entirely on Baldor Electric Company digital servomotors and drives – to provide the precision of movement needed for tight tolerance, large-scale profile cutting. The plasma cutters are being used to help fabricate the steel plate bow sections of two new Queen Elizabeth Class aircraft carriers, the first of which is due to enter service with the Royal Navy by 2016, with the second to follow by 2018.
The plasma cutters are installed at the Appledore (Devon) shipyard of Babcock Marine Division, one of the principal members of the ACA. The Appledore shipyard is involved in building the steel bow sections of the warships, which are then transferred to Babcock’s Rosyth (Fife) shipyard for integration and final ship assembly. The first of some 20 consignments from Appledore, comprising 11 fabricated units weighting between 20 and 36 tonnes each, were shipped by barge to Rosyth in August.
Techserv’s HS 4000 plasma cutters are very high performance machines, capable of producing high quality cut parts from steel plate sheets up to 5 metres wide and up to 35mm thick. They employ precision extruded aluminium for the chassis and main beam to ensure rigidity and low mass, and use a machined track – with racks to both rails – which can be mounted on mid-level pedestals or on a customer-supplied beam. Depending on the thickness of steel plate being processed and the type of plasma unit that is fitted, HS 4000 machines offer cutting speeds of 50 to 16,000 mm per minute.
HS 4000 plasma cutters are four axis systems, with rack and pinion drives to both the transverse axes and the synchronized longitudinal axis. The fourth axis controls the height of the cutting torch above the steel plate. Each of the four axes is powered by a Baldor BSM series AC brushless servomotor, driven by a Baldor MicroFlex 500 watt digital servo drive. The servo drives are controlled by a 4-axis version of Baldor’s NextMove ESB-2 machine controller. According to Techserv’s Technical Director, Mike Cowley, “We elected to use exclusively Baldor motion control products for the HS 4000 primarily because the combination works so well at providing the extremely high level of positioning accuracy that we require. In this particular case, the servomotors are fitted with BiSS encoders, which provide completely unambiguous absolute position data whenever they are polled by the controller”.
Mike Cowley also points out that Baldor’s multitasking Mint programming language is very easy to use, “This helped speed the development of our motion control programs, and the fact that the language uses the same API (Application Programming Interface) naming conventions as ActiveX commands further simplified integration with the front-end control PC. We found the HTA (hold to analogue) command to be especially useful, because it allows us to handle the plasma height sense function entirely within the NextMove controller, in real-time.”
Overall control of each plasma cutter is handled by an on-board industrial-grade PC. Designed specifically for shape-cutting machines, this PC features a 15-inch touch-sensitive full color HMI, and employs graphical shape representation to ensure ease of use. The software runs under Windows XP and provides real-time control of all the cutting machine’s advanced motion functions, including contouring, as well as its Kaliburn Proline 2200 plasma unit. The software also controls the torch height system on the HS 4000, monitoring the arc voltage and automatically adjusting the torch-to-work distance to provide optimum cutting performance and to ensure machine safety.
Baldor Technical Datasheets